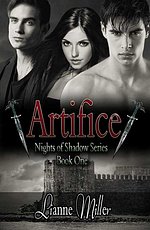 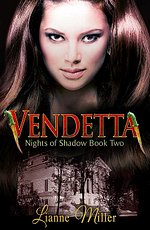 Dmitri Markov faces the greatest challenge of his unnaturally long life. His attempt to end centuries of torture and pain traps him in a void where nothing exists but an unseen enemy unlike any he’s faced before. It’s only when the first glimmer of light pierces the darkness that he discovers it may be too late to escape.

Eliza Ross must risk her life to reach Dmitri, or she will never untangle the lies keeping her captive in Shashenka Belyakov’s coven. The truth can set her free, but at a price—it may redefine her past, mangle her future, and unleash an evil that wants to claim her as its own.

Matt Wolfe’s life changed forever when he received Eliza’s mark, but that doesn’t stop him from helping her lead a revolt that may get them both killed. When a near-fatal attack forces Shashenka’s hand, a maxian of questionable loyalty may mean the difference between peace and ruin for the shadow realm world.

Shashenka’s artifice is exposed, and there is no turning back. Paths will merge and collide. Blood will be spilled, and lives lost. But lurking in the shadows is a danger craving a greater sacrifice still. Fate dispenses lessons among choices, and it always collects a fee when it pays the rewards.

Eliza Ross believes she is living an isolated life in Montana without family or friends. Then a mysterious stalker turns her world upside down. The cops think she is crazy, but the medical doctors soon discover that Eliza isn’t normal—and they are determined to find out why.

Dmitri Markov is a Druzhina who knows everything about Eliza, but his mission is to make her forget. He will do whatever it takes to keep her alive and deliver her to Shashenka Belyakov. Other elite Druzhinas are sent to assist Dmitri in recovering her from the hospital. They will not fail.

An unlikely friendship with a mortal enemy only deepens the mystery, putting Eliza on a collision course with Dmitri and immersing her in a shadow realm where nothing is what it seems. As the truth unravels, Eliza learns that she must destroy the one responsible for enslaving her, or she’ll never be free—but as she races into the unknown, she unwittingly sends Dmitri into a downward spiral that may doom them both.

Don't miss the exciting conclusion to the Nights of Shadow series!

Elizabetta Rossellini Markov faces an unimaginable captivity. The sorcerer Guillermo Sanchez has trapped her in a dungeon guarded by unearthly monsters—and his evil magic has her imprisoned inside a body she can’t control. Her only chance at freedom lies with Dahliorn, a sheridauk whose skill with dark magic may make him more enemy than ally. Even if she survives, she may never escape.

Dmitri Markov battles constantly against the bloodlust that will consume him if he cannot recover his mate, but his search for Elizabetta is thwarted again and again as fate shoves him down paths he is reluctant to follow. Desperation to save one life puts another’s life in peril, forcing him into a deal with a ruthless king who leaves him no way out. Failure means a future enshrouded in darkness, with little hope of ever finding the light again.

Matt Wolfe’s alliance with a former enemy may kill him, but he’ll stop at nothing to get his baby vamp back. He’s on the cusp of knowing a love that will ensure a bright future, when loss delivers a heart-stopping blow—Matt’s wolfish luck may finally have run out.

Guillermo Sanchez has plunged the human world into pandemonium in an insane quest to shatter civilization and mold it into his own creation, something he will rule over and control. Centuries of grooming his niece, Ramira, as a weapon in his sadistic war places him on the brink of victory, but before he can succeed he must end the Druzhina and take out the shadow realms’ leadership. He will win, or he will bring down every living being with him.