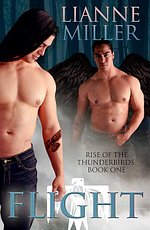 There was a time when thunderbirds walked the Earth. Six centuries later they’ve fallen into legend, stories for children to revere, to pass down to each new generation. Now twin brothers Nate and Rafe Redhawk seek to separate fact from fiction because their lives and futures depend on the truth. Immortality hangs in the balance—and a chance to choose or change their destiny.

Rafe believes the thunderbirds will return one day to be guardians for the people once more. For him, being chosen will be an honor and a blessing, and he will do whatever he must to be worthy of it. But he cannot find the one woman who will help him achieve immortality and embrace his destiny and his duty.

Nate, too, acknowledges the legend, but to him it’s a curse—and he’s doing all he can to cheat life, grow old, and die. Desperate to escape immortality, he flees the woman who will condemn him to that fate. He’ll take any path but the one that looms before him.

One brother’s dream must become the other brother’s nightmare. But the three sisters of fate have their own plans, and they’ve long since set the future in motion. An ancient fae prophecy is tied to the Native American thunderbirds legend, requiring an alliance between Earth and Seelinara to bring both to fruition. With the whispers of war, choices must be made, and lines drawn. Individual fates collide for a common destiny. And while the personal cost is unimaginable, failure means the extinction of two worlds.

Twin brothers Nate and Rafe Redhawk and their mates, Jo and Ina, have risen as the thunderbirds of legend. They are destined to be guardians of the people, but before they can assume that role, they must stand as warriors and fight to save the world from an evil destroying it through war and plague. Yet not all battles they face are against outside foes—scandal, misunderstanding, and family tension threaten their team and their future.

Rise of the Thunderbirds